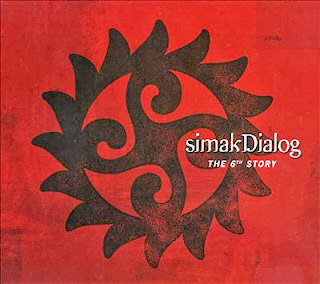 The Indonesian fusion group Simak Dialog makes music like nobody else. They are into I believe by now their 6th album, aptly titled The 6th Story (MoonJune 056). It plays on my computer as I write this.

The new album continues the trajectory set by the others. A three-piece Indonesian percussion section lays down a hip combination of traditional rhythms and more fusoid beats. The bass guitar of Adhitya Pratama, the guitar of Tohpati, and the keys of Riza Arshad layer on top in a deft combination of contemporary fusion and melodically Indonesian elements.

Chick Corea in Java? Not exactly. Riza is the composer and engineer for these sides and he plays some very respectable keys, both solo and ensemble. His compositions have heft and much originality. Tohpati can rock-fuze out in his own original way and he does. The melody lines often feature intricate guitar-key lines that keep the ears perked up. And Tohpati gets some excellent guitar solos going now and again for you plectrum fans.

By now there is a very strong music meld between group members. They are tight and very simpatico. They may rock a little less hard on some numbers than on some previous albums but there is continuous flow throughout and the music is challenging in interesting ways, always.

It's another winner. You might do well to start with one of the earlier ones if you don't know the band (do a search in the appropriate window on this page for reviews of older albums), but this one gives you Simak Dialog in full bloom. Listen and dig!