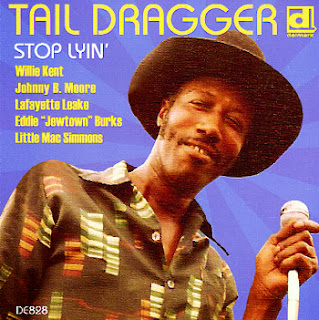 Tail Dragger (aka James Yancy Jones) is one SINGER. He has that Howlin' Wolf sort of gruff soul and you can hear it to good advantage on this, his very first album Stop Lyin' (Delmark 828), recorded in 1982. Only two songs were originally released from it (on a 45 and then an anthology), so this is the first time the full album has been available.

He belts out some very solid Chicago blues with an excellent band. As a bonus he reminisces for a few minutes about his early Chicago days at the end of the album. It's very funny-real and informative about what things were like for him and the crew he ran with.

It's the real deal, the real blues, done with lots of soul and fire! Oh yeah, it IS.