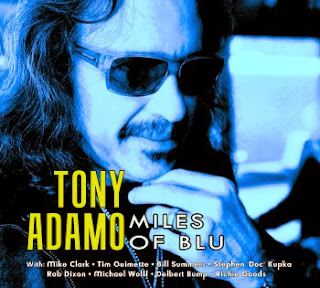 Tony Adamo is all about THE FUNK. The Funk in the widest sense, from the Miles of "Walkin'" to Horace Silver, Jimmie Smith and the B-3 tradition and on to James Brown, Tower of Power, Parliament, and all of that a springboard for what goes on in the album Miles of Blu (Random Act 1012).

Start with drummer Mike Clark, rhythmical pivot point of Herbie Hancock's Headhunters band in their classic incarnation. He is still going strong. He produces the album, plays the drums on it, and presumably has much to do with assembling the excellent funk band that underpins and hips up the whole recording. They are on it! On it with some great horn riffs, hip guitar, grits and gravy B-3 and Mike laying it down.

And on top of it all is Tony Adamo, who has soul and lets it loose. He has his own brand of rap that channels the beat poets, so we get a series of word-poems that extols funk, sets the street vibe hipster thing winding out. He does a bit of singing in the blue-eyed soul mode in between recited-rapped lines, too. James Brown he isn't but he is nakedly himself here, and I appreciate the sincerity there. When it works, it works. And the band carries it throughout. Hey, and my wife digs it, which means something to me, because she has "people's ears," maybe more so than I do.

Tony has the right vision and gives it to us. Is this the greatest thing I've ever heard in the funk zone? No. But the hipness of the full band and Tony's exuberant hipster vibe give you something that makes you smile and tap your foot. Tappin' hard, brothers and sisters!