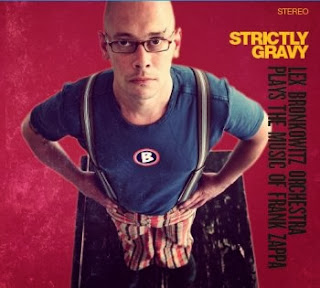 For those that follow these things, there have been a fair number of outfits devoted at least in part to the music of departed master Frank Zappa. Zappa Plays Zappa is perhaps the best known, headed by Frank's son Dweezil. I've listened to most of them, having a love for the music that goes back to my adolescence, when I purchased a copy of Freak Out at Sears right as it first came out. (The cashier actually asked me, "You sure you want this?!" I said "Yes!" even though I had no idea what it was going to be. The cover did look pretty scary, but I liked that. Turns out I was in for some challenging music. The Mothers/Zappa opened up a universe of things for me over the years that started at that moment in 1966.)

One of the most interesting and successful work in this realm comes from the Lex Bronkowitz Orchestra, specifically on their recent album Strictly Gravy (nl fzio CD). What's really good about this outfit and this set? They play a few that have gotten plenty of attention, "Big Swifty" and "Mr. Green Genes," for example. But then they tackle some that have not been often heard, like "Uncle Remus," "Andy" and "rdnzl." And there are medley combinations (something Zappa himself favored in live settings) that work quite well.

The arrangements are by Lex. And they follow best practices, to my mind. They freshen up the sound and adapt it to the group at hand (Lex on guitar, Katharina Debus on vocals, plus mallets, drums, bass, and a guest horn section of sax, trombone and trumpet). They do justice to the music by staying very close to the spirit of Zappa's musical thinking, yet extend that for today.

Lex plays guitar very nicely, and can and does solo in a post-Zappa mode, as effectively as anyone playing today. He does something with the irregularity of phrasing and that soulful melodicism, both Zappa guitar hallmarks, and he even gets a Zappa-esque sound from his guitar. Yet it too is an extension with a creative, original component that is a joy to hear.

Finally, the entire band is very good. Everybody can play, Katharina has soul and finese. She makes all she sings seem right, but also seem right for HER.

This one clocks in at 36 minutes. Surely no second is wasted time. In fact this is one of the most invigorating and satisfying Zappa tributes I've heard. It stands on its own as excellent music in its own right. Now that's very cool!