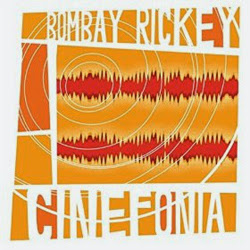 The music of Bollywood over time has done perhaps what no other music could get away with so consistently. That is, in the interest of the movie soundtrack world, succeeded in combining not only East and West, but everything with everything else, musically speaking. Bombay Rickey celebrates that Bollywood, an eclectic, sometimes brilliant and always vibrant amalgamism. Then it sends it even further over the top. Cinefonia (Cowboys and Indian CI-1) is the looniest fusion music one is likely ever to hear; yet it works.

Bombay Rickey is Kamala Sankaram's brilliant vocalizing (and accordion playing) with Drew Fleming on guitar and voice, and Jeff Hudgins on reeds, voice and keys, with a backing band. They take the Bollywood premise that "everything potentially goes with everything else" and take it to the max. Cowboy music, Indian, coloratura soprano opera, surf, Latin, funk, rock, fusion and anything else you can imagine come together in funny but really compelling ways.

The guitar playing is at the forefront along with Kamala's exceptional vocalizing and the rest is rather ingenious arranging-composing that manages to piece together things you can't imagine being part of one thing.

It is one hell of a hoot! If you can imagine it, you'll probably like it.