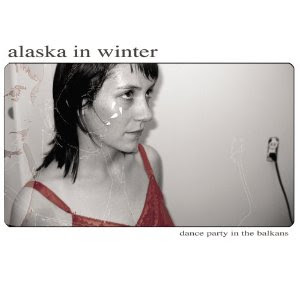 January 26, 2009—Brandon Bethancourt heads up an outfit known as Alaska in Winter for today’s CD. He plays most of the instruments and writes the material. Their CD Dance Party in the Balkans (Milan) is an unusual mix of songs that have bitter-sweet, naïve and melancholic qualities. Some of it sounds like it came from the Twin Peaks soundtrack in that series' more “innocent” moments.

It is decidedly unusual fare and remains mournfully tuneful throughout. The band and these tracks were born out of a period Bethancourt spent with his laptop in, yes you guessed it, Alaska. When? Winter. The vocals are sometimes vocodered for a robotic despair, sometimes not. Zach Condon sings on a cut. What else? I can’t say I dislike it. I don’t. There are haunted moments. It certainly seems winter-like in its icy outlook on the world. It makes you wish spring would come sooner than it will. [A year later and we have another spring. And so it goes.]
Posted by Grego Applegate Edwards at 5:44 AM