The Unthanks in a Beautiful Third Album 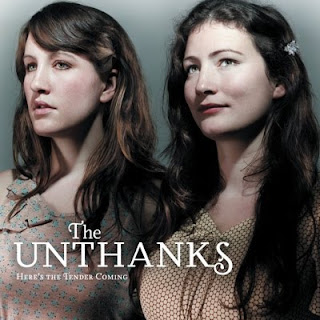 Here we are with a third album by The Unthanks and I am just getting on to them. One thing nice about doing this music gig is the discoveries one makes--thanks to people sending me things.

I listened to this album Here's the Tender Coming (Rough Trade) for the first time out of the corner of my ear and I though well of it. But it was the successive listenings that brought out the nuances. Two beautiful singers from what the Roman Empire called "The Tin Isles," (that is, England) sing angelically. Kate Rusby comes to mind and to me that is an most auspicious boon since I dearly love Kate Rusby. Anyway it's Katie and Rachel Unthank (sisters) singing traditional sorts of folk things and just not any old way. The vocals truly moving, the arrangements sparkling, the lyrics with the narrative poignancy of the traditional ballad. It's about love and its vicissitudes, being a woman in a traditional world, lonelyness, work, hardship, the god-awful toil of the industrial revolution over there or perhaps just poor rural existence.

Some of the songs sound like they've been penned today, some today for yesterday, some clearly yesterday, but the point is that the package combines the best in songstering with just bloody great singing and arrangements that go far beyond the norm.

Here's the Tendering Coming deserves any superlative I could conjure up. This is a fabulous record. If you like Rusby, Sandy Denny and the Fairports and things traditional yet firmly planted in this century, you'll really get with this music.
Posted by Grego Applegate Edwards at 4:27 AM