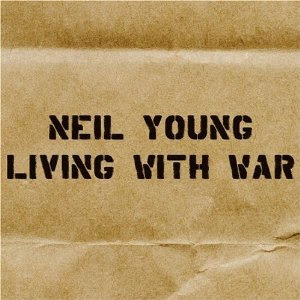 January 14, 2009—With the presidency of G. W. Bush now ancient history, it’s probably high time to bring up Neil Young’s CD of several years ago, Living with War (Reprise). One thing I appreciate about the course of Young’s long and interesting career is that you can never be sure what he is going to do next.

Now I am not here to tell you what to think about politics (or anything else), but surely Neil spoke to a large segment of the public that had become increasingly certain that the Bush regime was a failure. The CD is filled with anthems expressing the despair of the time. Obviously with a new presidency upon us, these issues begin to be a part of the historical past. But of course issues raised on this album are still with us in a number of ways. Living with War is by no means Neil Young’s best record. It captures a moment, with musical high points that include a rousing version of “America the Beautiful.” May Americans continue to be worthy of those words with a renewed dedication to what is good and great about their legacy. So we go forward to a new chapter in the history of the present.
Posted by Grego Applegate Edwards at 6:36 AM