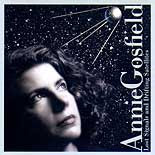 January 20, 2009—New York based composer Annie Gosfield could be considered my neighbor. I live just outside Manhattan and so am a part of the NY Metro sprawl. Since my tightened budget does not allow for cultural events or all but the most necessary commuting I don’t get into the heart of the city often and it is probably not likely I will make face-to-face contact with her in the near future. Nonetheless we both belong to an invisibly connected universe of cultural workers and, whatever it means, a New York sort of outlook on it.

Ms. Gosfield’s music is well represented on the Tzadik release Lost Signals and Drifting Satellites. Now I find myself responding to her music almost instinctively. Is it the shared aural and cultural values of this metropolis that make that possible? It could have something to do with it. But most importantly Ms. Gosfield has absorbed the vocabulary of modern music to speak it fluently and with originality, and that sounds a chord of resonance with me.

Her short quartet “Lightheaded and Heavy Hearted” comes off skillfully and sincerely as something that comes after late Bartok and brings a personal touch to the genre. The title cut, “Lost Signals and Drifting Satellites” is perhaps the most captivating of the pieces, combining thoughtfully constructed solo violin passages with washes of gongs, percussion and electronics. In its own way it reminds me of my youth and the local hours I spent listening to the family short wave for the sorts of static and bleeps that I believed were raw audio satellite transmissions. I don’t know the truth of that but this music reminds me of what has become of local sectors of outer space in the years following the heyday of the space program and those sessions I had with the radio. Parts of our above-earth space vacuum must be like certain abandoned industrial sectors of Passaic, NJ (I am thinking of Robert Smithson’s photoessays on the latter topic, done in the late ‘60s). No longer functioning as intended (the satellites drifting, perhaps long since out of service), they exist now emptied of their original meaning, there as a symbol of time passed.

The remaining two pieces further explore the sound poetry of where we are now through prepared piano writing of style and earthiness, effective string writing with gongs and percussion, as well as electronically processed sounds of nameless machines and power tools. Gosfield’s music is not exactly casual, but it certainly isn’t formal either. There is a wondrous, restrained expressiveness and interesting juxtaposition of sound classes, none of which wear out their welcome on repeated hearings. I do recommend this disk for anyone who would like to know something of where new music is right now. It’s here, looking backwards to the ended century and the close of the American Machine Age as well as forward to tomorrow and what that will bring. That’s somehow appropriate music for the beginnings of a new epoch.
Posted by Grego Applegate Edwards at 6:53 AM