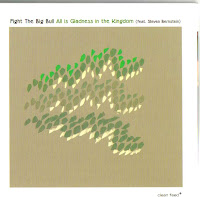 Guitarist Matt White and trumpet extraordinaire Steven Bernstein put together some provocative charts for the avant-contemporary big band Fight the Big Bull and their new album Gladness in the Kingdom (Clean Feed). White and Bernstein are joined by ten other game musicians in a powerful, rough-and-ready set of pieces that utilize both free timelessness and hard riffing, almost rock intense lines for a very exciting romp through musical thickets overflowing with ideas.

Like some of Steven Bernstein's large ensemble music and Carla Bley's band at its best, there is a healthy unity of the written and the improvised, the free and the rooted pulse music of the modern vernacular. And it's an extroverted, brash, boldly emblazoned sound they get.

Bernstein's raucous trumpet and White's effects drenched psyche-soundscape guitar find good company in the other soloists featured on the various tracks. All are lucid. The ensemble sonority and the many twists and turns in the charts make for an excellently conceived, heartily executed, exciting CD.

THIS is what a modern big band sounds like. Fight the Big Bull doesn't try to recreate successful, hoary old bop charts or swing era niceties. It's music of today. It's excellent music of today.
Posted by Grego Applegate Edwards at 4:18 AM