The Mountain Goats, The Sunset Tree 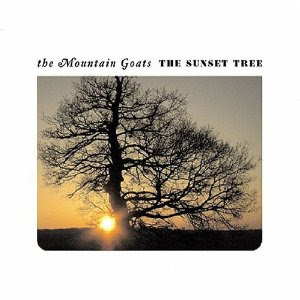 January 19, 2009—I took a look at the Mountain Goats’ site before sitting down to pen these lines. They have a bunch of releases and it appears that bandleader/singer John Darnielle put his most personal thoughts and experiences into the lyrics on the CD up for consideration, The Sunset Tree (4AD), recorded in 2004. Now as an outsider to band lore this doesn’t mean anything to me, other than that he spills his guts obliquely and there are those who will care. Not that I don’t, but hey it’s like listening to a stranger on a train confessing details of his life that you're not really sure what to do with. All I can say is “bully” for this guy.

There are 13 songs of a folksy-songwriter sort, Erik Friedlander plays some nice cello arrangements and the rest is pretty much all Darnielle. His voice doesn’t appeal to me much. It has a chipmonky rasp. Now I can’t say THAT is enough for me to turn something off, physically or mentally, so I didn’t. In fact I listened five times, the fifth as I write these words. It’s an acquired taste, but I’m afraid I haven’t quite acquired it yet. He feeds his kittens, dons or doffs his earphones, wants some lady to kiss him on the mouth. As a youngster I used to overvalue the appeal of my everyday life for others. Perhaps early adulthood makes you feel that way. Now I’m not so sure. This guy has something to say, but I’m not certain that it’s something so urgent you must rush out and pick up this CD. And it's ultimately all in the telling. I don't believe that this particular telling quite reaches the level of "art."
Posted by Grego Applegate Edwards at 7:34 AM