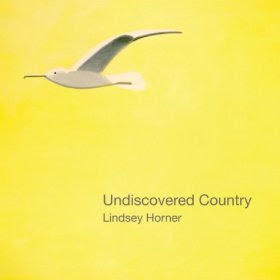 One thing about Lindsey Horner, don't expect the expected. He has caught the listener's ear and sometimes caught the listener's ear unawares. He's been a first-call acoustic bassist with many of the jazz world's most accomplished and interesting artists, like Muhal Richard Abrams, Bill Frisell, Dave Douglas and Myra Melford, he was a member of Jewels and Binoculars, a jazz group devoted to the music of Bob Dylan, and he's made a number of albums that cover a lot of ground. None of that quite prepared me for his new album, Undiscovered Country (Artist Share 0105). Unbeknownst to me Lindsey has also been performing with a couple of illustrious Irish folk artists. And the new album incorporates that experience into the mix.

The album, then, combines an electric fusion organicism with a folk element, sometimes bursting outright into a tuneful Irish song. Andy Irvine sings the vocals on those and they grab at you. One is from the composing pen of Irvine, the rest save one are by Horner.

The instrumentation is unusual. Lindsey of course is on bass, Rob Thomas plays a fine violin, then there's drums, marimba, tenor (Erwin Vann), two electric and one acoustic guitarist (with the former category sporting two good soloist, one a sort of modern-day equivalent of the late Sam Brown and the other with some slightly post-Garcia stylings), percussion and some assorted other instruments in a doubling situation.

It's a group that sounds different from the beginning. The different elements combine in ways that sound perfectly natural, though of course much initial thought and preparation must have gone into realizing the music. The result is a cross between the old folk-rock outfit Pentangle or the modern-traditional Irish group Patrick Street with fusionoid arrangements and solos, sometimes reminding a little of those Horacee Arnold albums from the'70s, but specifically in how the marimba and guitar(s) are utilized in the ensemble.

What it goes to show you is that it behooves us to open our minds to what is coming out these days. Sometimes you don't get exactly what you ordered. And when that happens, sometimes you get something that delights in its unexpected ingredients blended with mastery. Undiscovered Country is that sort of delight.
Posted by Grego Applegate Edwards at 3:59 AM