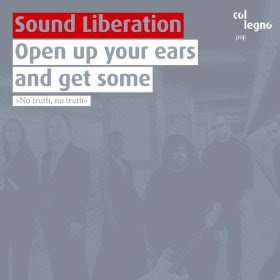 Gene Pritsker, composer, guitarist and leader-founder of the Sound Liberation Ensemble. He is in the advance guard of musical genre conflationists out there. His Varieties of Religious Experience Suite was reviewed on these pages several months ago. We return to Gene and his 2008 album with Sound Liberation, Open Up Your Ears and Get Some (Col Legno 20902).

Now this one is not quite at the level of VRE. Part of the reason for that is that it is divided into 13 separate pieces, each one an entity into itself. There is of course nothing at all wrong with that. But one tends to get on the wavelength of each piece separately, which of course is the idea of a series of short "songs." The cumulative effect, for me anyway, was a good one. But the epic aspect of a longer work puts a singular impression on the listener. This one gives you a multiple set of universes.

Sound Liberation covers considerable ground here, in ways that captivate and intrigue. In the course of the album there are liberal slices of standard classical repertoire refitted into a contemporary rock-hip-hop context. There's an operatic tenor, some raps from Gene and others in the group, hip-hop stylings combined with just about everything, and ambitiously interesting r&b-pop-art songs sung enchantingly by (I believe) Ninni Lindh, with background accompaniment that for example might feature a string quartet, then a rap-against-choral passage out of a kind of baroque sensibility, some very cool guitar soloing, and then on from there.

The thing about the genre synthesizing, and it's true of anybody working with these sorts of things, is that not all artist-ensembles can handle every style with world-class excellence. In this case, the raps, while convincing, are not at the level of Snoop, Lupe Fiasco or Twista, say. The rhythmic punch, vocal tone control and stringing of rap wording are not quite at that level. But hey, who else is even trying to do this?

What you end up with on Open Up Your Ears is a far ranging and musically substantial album with moments that come together in a sublime new hybrid, and other moments that find Pritsker and the band working towards something that they are on the verge of nailing. The former outcomes are more frequent than the latter. And in the end this is some startlingly original music. I am very encouraged when I hear music like this. Cool, Gene. Keep on going!
Posted by Grego Applegate Edwards at 4:11 AM