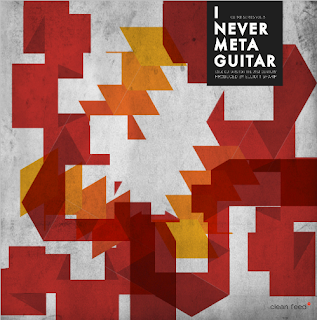 Based on Elliott Sharp's wide-ranging and intelligent webcasts on MOMA's PS1 website, I gained an appreciation for Mr. Sharp's keen ear for the contemporary and its roots. That appreciation has continued to grow after repeated listens to the anthology of modern solo guitar apty dubbed I Never Meta Guitar (Cleanfeed CFG 005) that Elliott curated and produced and that has been hitting the distribution avenues in the last several months. It's a selection of some of the brightest lights on the guitar scene today, as defined by the idea that they are doing new work, some avant garde, some just ahead of the pack in some less specifically formulizable way, some simply excellent purveyors of imaginative guitar playing.

There are 16 relatively brief pieces on the disk, some electric, some acoustic, some with a "prepared" guitar. Many are unaccompanied solo works; others include others. Either way it's a very cogent summing up of the present and perhaps some of the future directions that will branch from current practice.

Every cut is worth hearing. The list of guitarists is impressive: Mary Halverson, Jeff Parker, Henry Kaiser, Nels Cline, Brandon Ross, Michael Gregory, and Elliott himself are some of the more well-known participants. There's even a little banjo to be heard. Most of this could go under the rubric "improvisation," though some pieces sound worked out pretty thoroughly.

This is it. It's the dope on what is new in the world of the guitar and its currency as a solo vehicle unto itself.

No self-respecting guitarist or guitar fan should miss this one, seriously. It puts a frame around where we are so we can study, admire, and gain from it. That's very important and Elliott shows he's just the one to put it together.
Posted by Grego Applegate Edwards at 4:02 AM