Tarun Bhattacharya and "The Best of Indian Santur" 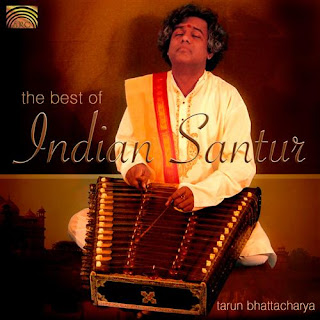 Ravi Shankar's Gharana (school) of North Indian classical music included the late Ali Akbar Khan, his father Allauddin Khan and, of course, Shankar himself, who studied with Pandit Allauddin Khan. Ravi Shankar in turn has introduced the practices of his Gharana (and his own innovations) to another generation of Indian music masters, one of which is Tarun Bhattacharya, who plays the santur. The latter is a many stringed instrument that is struck with plectrums, similar to the Hungarian cymbalom or the hammered dulcimer of North American folk tradition. Think of it as like half of a string frame of a grand piano and you get some idea (but see the cover image reproduced here).

There is a new CD of Tarum Battacharya out called The Best of Indian Santur (ARC Music 05111), and it is an excellent listen. There are performances of three ragas plus a light-classical piece.

Bhattacharya is a master of the santur. He has a dramatic sense of dynamics and a strongly lyrical but percussive style. He can get dampened staccato notes by pressing the plectrums onto the strings without immediately bouncing them off, he can do slide notes with his plectrums, a buzzing sort of "press roll" sound, and otherwise is quite masterful. His alaaps are well conceived, his middle-tempo playing maintains forward momentum and inventive brilliance, and he creates exciting, rapidly moving jhaptals in tandem with the tabla player (Shiv Shankar Ray).

If Shivkumur Sharma is the best known of the Indian santur players in the States, Tarun Bhattacharya is quite in his league and his own stylist.

This is a wonderful recital, worth every minute you spend listening to it. Those who don't know the magic of the santur are in for an experience!
Posted by Grego Applegate Edwards at 4:02 AM