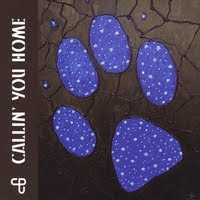 The Denver music scene. I don’t know much about it, except that a group named Coyote Poets of the Universe are a part of it. I’ve been listened to their fourth CD Callin’ You Home (SSR). They have a sort of zany bohemian irreverence at times. There’s also a slight retro-acoustic-folk component. I haven’t heard the earlier recordings, so I don’t know where they’ve been musically. For this one there is a hodgepodge of poetry, political and humorous material and some post-hippie songs.

If everything was like the final cut, “Burnt Down,” this would be quite a record. That tune has some sincerely soulful vocals by I guess Melissa Ingalls. It’s a strong tune with some good obbligato fiddle, slide guitar and clarinet. The song deals with determination in the face of romantic disappointment and stands out as something to hear repeatedly. That one reminds me a little of something Tracy Nelson and Mother Earth might have done, were they doing something today. There are some other numbers that struck me. Alas, the rest did not. May they do more with the musical intensity of the last song and I’ll be a convert.