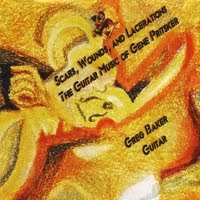 Gene Pritsker personifies the composer in the so-called postmodern world today. He engages with hip-hop, rap, r&b and rock while simultaneously developing an original style (or styles) in modern classical music. An aspect of that can be heard to good advantage on Scars, Wounds, and Lacerations: The Guitar Music of Gene Pritsker (no label listed).

This is a beautiful recording with Greg Baker as the guitarist on all pieces. The range of styles and moods covered are considerable. For example the title composition "Scars, Wounds, and Lacerations" is for solo classical guitar and consists of four short movements squarely in the solo classical guitar tradition, with more than a hint of Spanish influence, a wealth of inventive melodic ideas and well-crafted, idiomatic guitar writing. It is not a brutal piece as the title may suggest.

"Quaaludes and Fugues (Book One)" finds Greg Baker on the electric guitar for a series of fascinating, self-contained miniatures that vary from a kind of Mahavishnu-McLaughlin sound to modern contrapuntal writing that reflects Bach as much as rock.

The "Two Dances for Four Electric Guitars" puts Baker in the overdub mode for some lively motored sounds where the part writing is as modern as it is timelessly inspired.

The "Requiem" brings us into metal territory as Baker wields a distorted, effect laden guitar and is accompanied by a sampled band-orchestra. Here we have Gene Pritsker at his avant best. The four movement piece juxtaposes quirky yet idiomatic metal with all kinds of backdrops, from electronica with a backbeat to world music samples manipulated for maximum pulsation, to a loop of a snippet from what I believe is Mozart's Requiem used as a looping ostinato for some metal guitar pyrotechnics.

Pritzker is a phenomenon. Greg Bell is a guitarist who can convincingly and masterfully pull off the many stylistic shifts and collisions the music affords. There are few guitarists I can think of that could do justice to the wide scope of Pritzker's music. And it's not just that Mr. Baker does it; he thrives in the process, showing true artistry.

If you have an open mind (open ears) this one will get your attention and bring you much musical pleasure. Hats off to Gene Pritzker and Greg Baker for having the courage to even attempt to realize such a hugely disparate setting for the six-stringed instrument, and then to realize it with great beauty and skill.

See my other postings on this blog for more on Gene Pritzker's music.
Posted by Grego Applegate Edwards at 4:11 AM