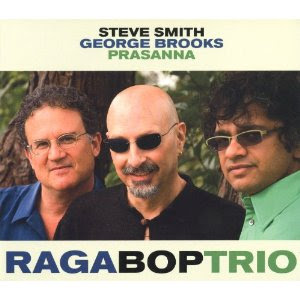 The Raga Bop Trio does not remain content imitating those who have gone before them in the lively hybrid formed out of combining Indian traditional and rock-fusion streams.

That is in part a product of the backgrounds of the three musicians concerned.

Drummer Steve Smith comes out of fruitful associations beginning with Jean-Luc Ponty and the prog rock group Journey. George Brooks is an altoist with key collaboratons in the Indian-fusion realm, including associations with Zakir Hussain, Larry Coryell (Bombay Jazz) and Indian flute virtuoso Hariprasad Chaurasia. Guitarist Prasanna brings to the mix a thorough grounding in South Indian Carnatic traditions. He has collaborated with many notable players, including Vijay Iyer, and he has been a successful and musically substantial film score composer.

All three are at their best on their debut, the self-titled album Raga Bop Trio (Abstract Logic BLX 025). Steve Smith is a very actively grooving presence with a rock-fuse heft and some very well developed full-set tabla-like creations. George Brooks has a very earthy tone and does much to give the group its sound. He also pens some of the best of the originals. Prasanna is a wonderful guitarist who brings the Carnatic alive as an electric force. I love the veena style shake-bends he does, for example. But he can also rock the house.

Together they work through an impressive program of compositional material and full-out jams. This is no superficial hybrid. The rhythmic and melodic aspects of Indian classical are thoroughly and skillfully intertwined with rock and fusionoid drive.

If you like the idea of these sorts of new grafts onto the musical plant, you will most certainly find the Raga Bop Trio to your liking. They do a superb job on their inaugural outing. Encore!
Posted by Grego Applegate Edwards at 4:12 AM