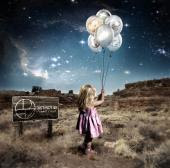 We've had a resurgence in new progressive sorts of rock lately. Some sound familiar, as if you are listening to a new album by a group you already know. Others do not sound that way. District 97 does not.

Hailing from Chicago, the band recently released their first album, Hybrid Child (Laser's Edge 1057), and it's a good thing they did, to my mind.

Leslie Hunt has a rock voice that's worthy of the music the band creates. Drummer Jonathan Schang wrote all the songs on the CD save one, which he co-wrote with Leslie. The instrumentation of cello. keys, guitar and bass seems right for what they do. And what they do is memorable. The songs stick in the mind, the prog routines and solo spots are filled with good musicianship and attention to the craft.

To me District 97 is a great example to play if someone wants to know what's good in the prog revival. They rock hard and they have great lines to work with. What more can you ask for? We can ask for a second album, that's for sure. I hope they keep growing because this is an impressive start!
Posted by Grego Applegate Edwards at 4:16 AM