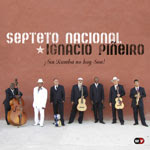 Incredible as it may be, the Septeto Nacional Ignacio Pineiro is the descendant of the band Ignacio formed in Cuba in 1927. They were instrumental (and vocal) in creating the style known as son habanero, which was the precursor of salsa. Though Sr. Pineiro passed away in 1969, the band is still going strong, with a fourth generation of players keeping the sound very much alive. They have a new CD Sin Rumba no hay Son! (Without Rumba There is No Son!) (World Village 468105).

This is music that transcends borders and speaks right to your musical soul. A key to the band is the hot trumpet soloist. But the vibrant presence of a tres (akin to a 12-string acoustic guitar) and a Spanish guitar gives the music its backbone.

You get 14 lively numbers on the CD, played with love and fire, recorded with excellent clarity. Clear a space in front of your speakers, because you may well have the irresistible urge to dance!
Posted by Grego Applegate Edwards at 3:44 AM