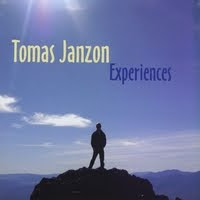 If you like a mainstream sort of jazz guitar, there's Tomas Janzon, Swedish native, New York resident, and someone who benefited greatly from listening to Wes Montgomery. He has a CD out this season, Experiences (Changes Music 113), and it manages to put together chops with a kind of charm.

The program runs through a couple of American Songbook standards, five jazz repertoire staples, a Janzon original, and a Swedish folksong in a studio and a live version.

What's important is how Janzon shows his Wes roots and admiration by building on the Riverside-period sound and style of the master rather than slavishly imitating him.

I find that worth plenty of ear-time. If you follow the Montgomery school of stringing, this will be a good one to pick up. It's quite enjoyable regardless.
Posted by Grego Applegate Edwards at 4:13 AM