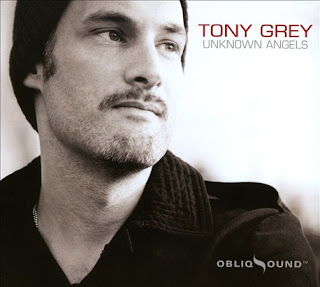 Tony Grey, bassist, multi-instrumentalist and writer of interesting music, has just come through with his third album, Unknown Angels (ObliqSound 110). He's played with McLaughlin, Herbie Hancock, Wayne Shorter, Zakir Hussein, Branford Marsalis, a pretty heavy list for someone who is not all that old. They needed a good electric bass player, one thinks. As we sometimes find out, that doesn't mean that a solo album by someone with such credentials is going to put you in a great place for your ears.

That's what I was thinking when I first put this one on for a first hearing. Turns out this is no lightweight entry into the 2010 offerings. McLaughlin and Hussein's Indian-fusion influence is there, especially via John Shannon, who plays some interesting lines, there are wordless vocals a la Pat Metheny (Tony Grey has a nice voice), and Tony's bass playing has the post-Jaco fortitude one might expect these days.

Unknown Angels has that "something else" that makes this an album that is not just "nice" but stays in your head. The composition, arranging, and overall execution of Tony's pieces are what puts this one above something noteful but not notable. It's fusionoid and ambient, it cooks sometimes and there is some really hip bass, good drumming and all the rest. In the end though the melodies linger on in the mind. You pick up the CD after a few listens and you say, "yes, THAT one," instead of "hmm...I know I played this a bunch of times but I feel a blank."

It's lyrical, thought inspiring, dream and reverie inducing. I would recommend this one to anybody who wants to hear some musically informed, poetic, fus-e-logian sounds. Recommended.
Posted by Grego Applegate Edwards at 4:00 AM