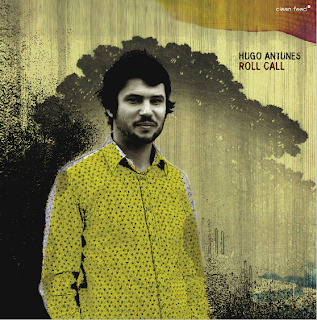 The more I hear of the Portuguese jazz scene the more impressive it seems to me. That's mostly thanks to the big ears of the folks at Clean Feed and their ambitious release schedule. Take today's CD, for example, Hugo Antunes' Roll Call (Clean Feed 197). I'm not precisely sure who in this sextet is and who isn't on the Portuguese scene (the CD was recorded in Brussels) but it illustrates my point nonetheless. Hugo plays a solid avant bass and writes some adventurous material. Joining him are two winds and two drummers: Daniele Martini on tenor and Toine Thys on tenor, soprano and bass clarinet; the two drummers are Joao Lobo and Marek Patrman.

This is music that breathes fire yet also gives contrasting space and runs through contrasting arranged, written and improvised routines that mix it up enough that one's attention remains focused throughout. It's a kind of in-and-out sensibility that much on Clean Feed puts forward these days. Yet Hugo Antunes' group does not in any way sound generic or derivative. I am occasionally reminded of the group sound of Jack DeJohnette's Special Edition band from the seventies, when Chico Freeman switched to the bass clarinet to contrast with the tenor of David Murray while the piano-less ensemble took the tempo loosely and convincingly. Now that's just a matter of the sound, and Antunes' group is not otherwise playing the mimic to that remarkable ensemble. And here we have two drummers, not one, working especially well together, one drummer's sound and execution contrasting with the other's at all points. And sometimes they kick up a hell of a row, inciting the horn men to both dizzying heights and tightly focused interaction. Both Thys and Martini are very good players. They sound good singly and, especially, working in tandem on double improvisations and arranged routines.

Roll Call constitutes another surprise, a sleeper, a jazz wolf in sheep's clothing. You look at the cover, you say to yourself, "OK..." Then you play the CD a few times and you say, "OK!!"

It's a goody. Give us some more of this, Hugo!
Posted by Grego Applegate Edwards at 3:53 AM