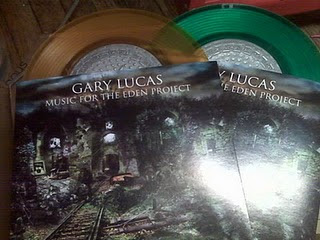 There is more than one side to Gary Lucas, guitarist extraordinaire. There's the Beefheartian avant electric bluesman, the shredding bandleader, the explorer of interesting "world music" syntheses, the soundscape artist and the acoustic picking and sliding master. No doubt one could split out these different areas into further subdivisions, but that's for another day.

What is important at the moment though is that there's a new single 7" vinyl Gary Lucas solo recording Music for the Eden Project (Snakefork), and it gives you two rather delightful miniatures, both composed and performed for use in a psychedelic environmental installation put together by UK artist Paul McGowan.

Each side is devoted to one of Gary's stylistic pursuits. One side is a masterful example of the acoustic picking style Gary has so well developed, and it is melifluous while having a forward-moving, finger-picking motor thrust (try saying that fast 10 times before your bowl of Wheaties tomorrow morning). The other side is a mini-soundscape with the patented Lucas psychedelic guitar solo aided and abetted by various effects to enable Gary to do the whole piece in one shot live. Lucas music lovers will know from the various excellent releases what those two musical territories entail. The single gives you more and does not disappoint. My only quibble is that there isn't enough. I want more of this "more." But hey, it IS a single, isn't it? The limited edition release is in colored vinyl too (my copy is in green), so you get something cool to have as well as to listen to. You can grab the disk at Gary's website or go the the Snakefork Facebook page.

So who is complaining?
Posted by Grego Applegate Edwards at 5:06 AM