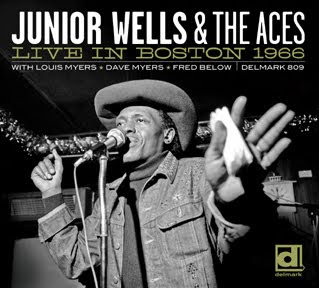 When I was a kid there were bargain 45-rpm record deals to be had at my local 5 & 10. You'd get something like 10 records for, if I remember right, $1.19. They put a minor hit on the outside edge of each side of the package, to entice you to buy. Buried within were eight more records, and those were not hits. You'd wind up with all kinds of things. In one pack I found a single by Junior Wells, "Up in Heah." I listened and I was entranced. It sounded like the Rolling Stones (well, in a way), only better. I had discovered the blues, the source! I bought some more "flop packs," as my peers called them, and was turned on to more blues artists, Jimmy Reed, for example. I was hooked. And I realized that music that was not in the top 10 pop charts could be good, great, even better than the hits! My listening expanded from there but I was a confirmed Junior Wells fan from that moment on.

Junior passed in 1998 and the world lost a great one. But of course his music lives on. Now we have an unearthed treasure to savor, a previously unreleased Junior Wells live date with his wonderful Aces, Live in Boston 1966 (Delmark 809). The sound is good and Jr. and the band is smoking! What a band. Junior vocals and harp, the legendary Fred Below on drums, Louis Meyers on guitar and Dave Myers on bass. At the time of the recording they were one of the hottest and hippest blues bands alive and they show you how hot on these sides.

They cover some of the blues classics in a way the only Jr. Wells and the Aces could. After his version, who cared about the others? This is blues with a blazing immediacy, soul incarnate. Live in Boston captures the excitement of live Junior, one of the greatest blues acts that ever graced the stage in a small club. And he was at a peak in 1966!

From "Feelin' Good" (He sings "gonna boog-gae" like his immortal sound depended on it) to "Got My Mojo Workin'" this is totally prime Wells and Aces.

Oh I know you know, if you know. But even if you KNOW, this is the stuff to KNOW. This is a killer disk, a knockout, a TKO in the first round. Do NOT miss this, if you have a soul, if you have soul, if you have soles on your shoes to walk down to your neighborhood record store (oops, there aren't any left. . . ) well take a virtual walk through cyberspace if you need to, just get to a place that sells this one. Like http://www.jazzmart.com, which you can get to by clicking the Delmark link in the section below. Then pop it on your player. Then you'll really KNOW you KNOW. Honest.
Posted by Grego Applegate Edwards at 4:12 AM