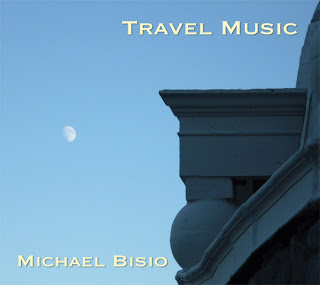 Dave Holland (album on ECM), Bertram Turetsky (especially The Contemporary Contrabass, released as an LP long ago on Nonesuch), William Parker, and Peter Kowald come to mind as having recorded exceptional contrabass solo work. I'm probably leaving someone out, but theirs are the performances that have become vividly etched in my musical memory banks. Now I can add to that list Michael Bisio, who has just recorded and released a full CD of solo bass, Travel Music (self-released, no catalog #).

It is intended not as an exercise in wizardry (which it also happens to be), but rather as MUSIC for the contrabass. And it succeeds remarkably well. Any acoustic bassist with a full set of techniques should be able to achieve liftoff both with the bow and pizzicato. Liftoff is just the start of the trip, though. It's where you go that matters in the long run. Michael shows himself a well-seasoned traveler with the sense of exploration and ability to go anywhere his muse takes him, anytime. He remains his very expressive self and goes to wonderful musical destinations whether using the bow or the fingers. "Nitro, Don't Leave Home Without It," for example finds Mr. Bisio engaging in the kind of extended creation of expressive energy, arco-style, that could only come from his bow.

Michael pays keen attention to the sound-color capabilities of the instrument, which of course are considerable. He has over the years mastered the near-infinite range of textures and colors available to him, and Travel Music in this and many other ways constitutes a tour de force of bass power and bass finesse.

There are eight improvisations on the disk. One is a loving tribute to Charlie Haden, by way of a poignant meditation on Haden's "Human Being." The program concludes by paying homage to the great master Coltrane with a moving rendition of "Alabama." In between there are eminently musical improvisations that show a structural logic. Phrasing is sure. Expression ranges from a searching and yearning quality to an untrammeled explosion of movement and turbulence.

Ultimately this is to be heard as MUSIC, and that's where Bisio and the recital move a giant stride beyond the too common bass-solo-as-interlude between horn & piano solos, bass solo as a break in the action. With Travel Music the bass IS the action, front and center. One does not expect the music to resume after the solo ends. The music is right there, from beginning to end. That's been the way with Mr. Bisio for a long time. He never fills space! This album gives him the chance to show in an extended way how far he has gone into territories both charted and unknown.

Travel Music is an exciting journey through a contrasting set of moods and modes. It's a terrific example of the solo bass as a vehicle for some real improvising, spontaneous composing and masterful weaving of line and tone. It should disabuse anyone who doubts that Michael Bisio is one of a small handful of true proponents of the musical contrabass in improvisation today. This album spells it out for you, in ways that are exhilarating, breathtaking, moving, and meditative in turn. Do not miss it. For further info and sound samples, copy and paste the following URL into your browser: http://michaelbisio.com/travelmusic.shtml
Posted by Grego Applegate Edwards at 3:51 AM