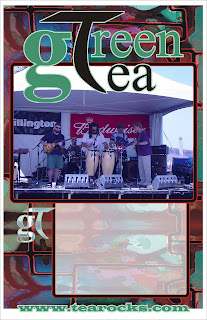 Some time ago I promised I would survey the Jambands out there, at least in the US. After a long pause, I look at another this morning. Green Tea is an outfit that hails from Rhode Island and apparently has garnered a loyal following there. I've been listening to a show from a band-approved download in the Live Holdings of www.archive.org. It's the band holding forth at the Woodriver Inn in Hope Valley, RI on February 2, 2008.

The music fills two full CDs. It gives you a pretty good idea of what they are about. They do a mix of covers and what seem like originals. Their vocals are rough-and-ready Dead style, meaning that they are spirited. Not always perfect, but spirited.

It's with the instrumental presentation that they thrive. The rhythm section has an appealing looseness. The lead guitarist has a Garcia influence, as is the case with many bands of this sort, but he can stray from it as well. The second guitarist plays a pivotal rhythm guitar role most of the time and it seems to me that jambands in the Dead tradition rely on such a role heavily much as a straight-ahead bop-jazz outfit will rely on the pianist feeding chord comps of the changes to the soloist.

Judging from the evidence of this recording, this is a band that can rock you and jam you of an evening. Enough said. Catch them if they are appearing around your area and it sounds like you'll have a great time. Stay tuned for more bands in future postings.
Posted by Grego Applegate Edwards at 3:42 AM