Floyd McDaniel Plays The Classic Blues on "West Side Baby" 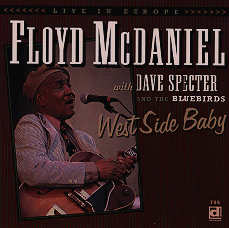 The blues. I have them. The times are right for them. They've been with me since I was a kid and I always return to them to refresh my soul. Floyd McDaniel may not be a name everybody knows but he embodies the blues. He died at age 80 in 1995 after a long career as another of the many notable Chicago bluesmen. If you've lived on the South Side of Chicago you know that the blues never needed reviving there. It's been a constant in the fabric of life since the urban blues revolution hit, when guitarists plugged in and let it ride, baby.

Floyd was recorded in concert in Germany in his last days. West Side Baby (Delmark DE-706) is the new re-release of that gig, and it shows you that age is no factor when the blues are real. There he was, 79 years old, singing and wailing on lead guitar, backed by a very hip band, affirming to everyone that blues with a feeling has no mandatory retirement age. The album was out-of-print for a while but it's here again and it's worth checking out.

Mr. McDaniel gives us some of his own special versions of some of the all-time classics--Handy's "St. Louis Blues," T-Bone's "Mean Old World," "Route 66," "Evening," which Jimmy Rushing made his own, "Sweet Home Chicago" and Floyd's own signature "West Side Baby," among others. He digs in and makes them Floyd McDaniel songs, absolutely.

It's prime, vibrantly alive music. Floyd plays a very soulful lead and his vocals are right there too. It's some stunning music if you dig the real blues. It's the way I'm sure he would want to be remembered. Click on the Delmark link below for more info and/or to order a copy.
Posted by Grego Applegate Edwards at 4:19 AM