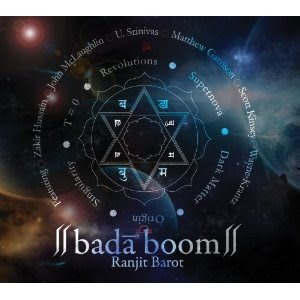 Music keeps going on in this world no matter what else is happening. It is a source of endless satisfaction to have the privilege to be exposed to new and exciting musical work.

That's how I feel when listening to drummer Ranjit Barot's Bada Boom (Abstract Logix 026). Ranjit has assembled a wonderful cast of musicians to play a kind of Indo-American fusion that to my ears has not been heard in quite this way before. When something is new and different, description becomes more of a challenge, but I welcome the opportunity to sing the praises of this one.

Where to start? Ranjit Barot's drumming? It is really impressive. He gets the rhythmic sophistication of classical Indian ways of playing with the drive and command of the fusion drum approach. It is a marvel. His compositions are no less impressive because they combine aspects of Indian vocalizing and rhythmic patterns with a melodic-harmonic orientation that seems to me is quite original. His lead vocals are really quite good as well. I found that the music made me catch my breath and I'm still finding that to be the case.

Then the cast of musical luminaries. Not only is it impressive, the performances too are something to hear with awe. Zakir Hussain on tabla for example, is an ideal participant--because of his innovative and masterful command of the musical language, but also because he has been one of the key pioneers in Indo-fusion as it has evolved since that later sixties. John McLaughlin....of course the same applies and he sounds great. U. Srinivas on mandolin? One of those players that you hear once and that's IT! There are many others, some from the "Western" camp, some out of the Indian tradition, but they all contribute excellently crafted pieces to this elegant solution to the jigsaw puzzle of cosmic musical life.

I don't think I can say enough about this one. It is something not to be missed. Maestro Barot has crafted an ornate and lustrous musical jewel. I hope he does many more and that I will be hear to appreciate them!
Posted by Grego Applegate Edwards at 4:16 AM