John McLaughlin’s New Electric Album “To the One” 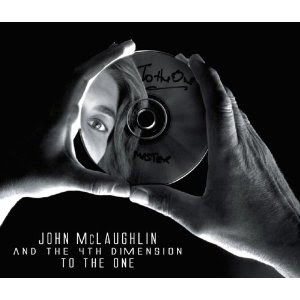 It is most surely a good thing that John McLaughlin has been devoting much of his attention to the electric guitar. Not to take away from his acoustic playing, which has had some wonderful periods (I like the Shakti sides and the trio with Trilok Gurtu best), but after all it was as a musical electrician that John originally revolutionized the music world, with Miles, Lifetime, Mahavishnu and on from there.

When McLaughlin burst onto the scene he had of course incredible technique but also a unique harmonic-melodic-rhythmic approach. And he had a sound: wiry, screaming at times, very electric but also distinctive.

His new album with the 4th Dimension band, To the One (Abstract Logix 027), shows him in great form burning up the fretboard with 16th note runs, rekindling the old fire, letting the guitar breathe with natural pauses between phrases, doing the things you expect from McLaughlin. But his sound has changed. Now one cannot expect someone to keep the sound the same all the time. Especially with the electric guitar. These days he has a richer tone, in part a product of the effects he uses. It sounds like he's adding plenty of chorus and a little flanger perhaps. It takes some getting used to and it’s been a part of his new sound for a while so it’s not a surprise. It’s a different McLaughlin in that sense though. Maybe a tad more like other players in the fusion bag. That’s all fine but it is a factor in McLaughlin today, no less than the later Stan Getz had a different sound than the earlier. Artists hear a different sound, the technology of electronics changes and artists find something available to them that they like. So, cool.

In the main To the One is a strong outing. The band has Gary Husband on keys and drums and a second drummer in Mark Mondesir (and a great drummer is critical to the McLaughlin onslaught. We’re covered there.) Bassist Etienne M’Bappe sounds limber and on the game as the one in charge of the bottom.

The originals are mostly worthy, with a few a bit less distinguished than what one might expect. Some of the harmonic-melodic interest of the early McLaughlin seems to be less in the foreground. Perhaps it is more important to establish the new electric band at this point and work further magic as time goes by. This is an Inner Mounting Flame to a future Birds of Fire, perhaps. That would be nice!

The fact is though, that this is a very good McLaughlin outing. I hope this band keeps developing its repertoire and growing ever tighter. Cheers, then.
Posted by Grego Applegate Edwards at 6:02 AM