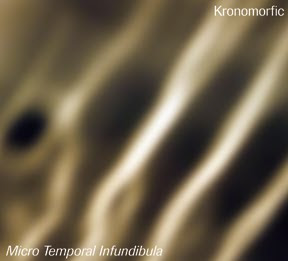 Some music sneaks up on you. You listen once and you think, "that's pretty interesting," but you don't drop what you are doing and run around the block shouting the news. Then later after more listens you start to appreciate the subtleties that only become apparent in time. That's how I experienced the Kronomorfic album Micro Temporal Infundibula (pfMentum CD059).

It's a collective of musicians with an improvisational-compositional agenda that doesn't quite fit into the typical pigeonholes ready-made to ease any uncertainties. It's a six-member outfit. David Borgo plays reeds, wrote one of the pieces, and arranged the music; Paul Pellegrin is a polyrhythmic force on drums and percussion and wrote eight of the compositions; Bill Barrett plays a lively chromatic harmonica; Junior Garrison plays a very atmospheric electric guitar; Nathan Hubbard gives the ensemble aural character on vibes and marimba; Danny Weller is on doublebass and pinions the groove and fundamentals nicely.

The music has an almost through-composed aspect to it. There are metrical grooves, highly interesting voicings for the ensemble, interestingly atypical melodies, contrapuntal ensemble densities that keep interest levels high, and some very worthy improvisations, especially from David Borgo. The improvisational and compositional elements integrate so well that the distinctions become less important in light of the total ensemble experience.

This is a kind of jazz that that grooves as it also provides some quite sophisticated musical fare. There are African influences and much else besides. Kronomorfic is a total pleasure for those with ears hungry for something beyond the ordinary. Very much recommended.
Posted by Grego Applegate Edwards at 4:17 AM