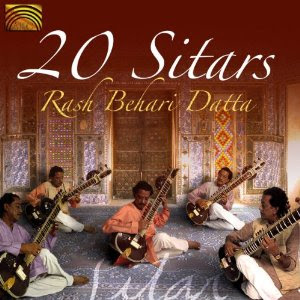 It's Boxing Day (observed?) in many countries and a happy one for those that have it. Many people have the day off regardless. Much good has it done us, and much good it will do us, as a reformed Scrooge said. Snow is piled up high here in the New York Metro area. But the music must go on!

Today something very special. Indian Hindustani classical musician and composer Rash Behari Datta has a CD out of Raga Malkouns performed on 20 Sitars (ARC Music 2312). Something of this scope, as far as I know, has never been attempted, and the results are rather excellent. As in a conventional Jugalbandi duet, there are composed passages. Then there are sections where a principal sitar will elaborate on the rag and the other sitars will comment, embellish and accompany. Sometimes there are simultaneous improvisations as well.
It's all quite exhilarating to hear.

Maestro Datta accomplishes all this by means of overdubbing numerous parts. Sarvar Sabri accompanies on tabla. The effect is sometimes one of harmonization, sometimes multi-melodic-scalular, sometimes there is a compositional punch gained. In all cases the music emerges from the raga tradition and does not transgress the bounds of good taste. Most importantly it has a ravishing sonority and beauty.

As an added bonus the CD concludes with a short but pithy exposition of Raag Shobhavari by sitarist Baluji Shrivastav. He plays only one sitar on this improvisation (!), but it is a nice performance and makes one want to hear more of him as well.

A one-of-a-kind event, this disk is. I would love to hear a raga performed with many stringed instruments and also many tablas, perhaps tuned to different pitches as Zakir Hussein managed so successfully in the Diga Rhythm Band. That's another time. perhaps. What matters is that 20 Sitars affords a rather marvelous sonic experience. Anyone who likes Hindustani classical music will no doubt find it rewarding.
Posted by Grego Applegate Edwards at 3:47 AM