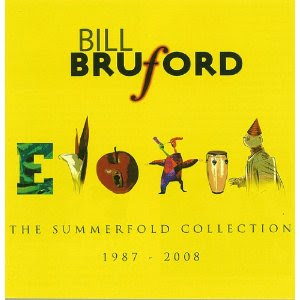 We continue with the second volume of the Bill Bruford retrospective. The first installment discussing volume one was posted earlier (see August 24, 2010 entry on this blog). This concluding release, “The Summerfold Collection” (Summerfold), covers Bruford’s recordings under his own name from 1987-2008. The emphasis during this period shifts away from vocals and guitars. Keyboard-horn ensembles and a well conceived brand of Fusiony sounds dominate these sides. With two loaded CDs in the set, there is much music. Generalization ends up being a little diffuse as a result. Suffice to say that Bruford’s drumming is the key element here. The compositions and arrangements do not function as a simple foil for a set of drum solos however. The music is subtle and well put together and the drumming is fully integrated into the routines. The drumming is without cliche and gives testimony to the creative musical mind at work.

It is the work with the bands Yes and King Crimson that gave rise to his reputation. It is by way of these latter recordings that he fulfilled the promise of his talent and showed himself a very productive, capable leader and musical conceptualist. Those who enjoyed his work with others will most certainly not be disappointed with the more personal side of his music here. Those coming to his music for the first time will be pleased with the wealth and quality of music offered. Good sailing to Mr. Bruford in his retirement. He’s deserved it.

Originally posted March 24, 2009 at www.gapplegate.com/musicalblog.html.
Posted by Grego Applegate Edwards at 5:56 AM