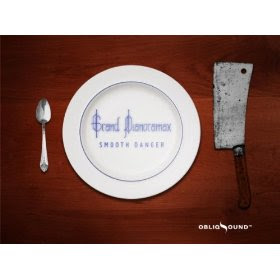 Genres don't hold steady if you look hard enough at them (or listen, anyway). The edges begin blurring and soon enough you feel that, with certain artists, it's really all about following a musical vision wherever it might lead, and that "where" does not always stay in one place docilely but circles around and doubles through any manner of possibilities.

Such is true of the duo Pianoramax, a Berlin-centered pairing of key virtuoso Leo Tardin and drummer Dominik Burkhalter. Their third opus Smooth Danger (ObliqSound) lands on hip-hop, rap, progressive rock, a hint of electronica, fusion and funk with a kind of anything goes attitude. That wouldn't matter if the music was just ordinary mass-cranked pablum. And there's plenty of that out there, music that was devised first and foremost to cash in on some horse-hockey fad. That's not what Pianoramax is about.

Rather they devise key-drum music rich in nuance, rhythmically vital, melodically and harmonically irregular with the kind of crystalline beauty you might find in a pile of shattered glass under an archaically humming arc streetlight at night.

I perhaps like everybody make assumptions, many of them, before I even listen to an album. I wont go into what they were for Smooth Danger. Suffice to say that the music wasn't at all what I expected, and that it grew on me as I continued to listen. It's a bit of a treat, dead serious about itself but affording a good ride into some idiosyncratic world that would not be there if it weren't for these two musicians.

You can nab this one as a download at your favorite downloadary.
Posted by Grego Applegate Edwards at 3:51 AM