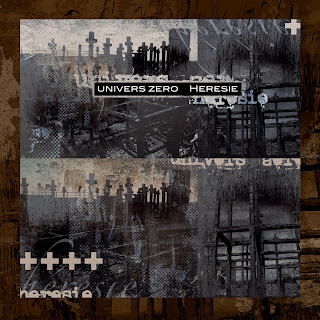 Belgian enclave Universe Zero crafts a highly original concatenation of rock drive, expanded-tonality modern-classical part writing, doom drone (without the drone), minimalist cyclicality and the feel for long form that Zappa put across in the pioneering of such a hybrid music. They don't sound like a Zappa group, though. The way they combine distinctively long wind and string lines that contrast with drums, keys, etc. counterlines puts them in a class all their own. The passages of contrapuntal writing are quite exciting; the level of compositional invention is high. All this for a rock outfit? Not just any rock outfit. I doubt there are many bands that could match the sustained pitch of sophisticated composition-performance on continual display. They don't improvise much. OK so you can't have everything and it's not meant to be a jam, surely.

Some of it sounds Stravinskian, some does not, but it is all weighty music.

The foregoing applies to their recently reissued album Heresie (Cuneiform), which originally came out more than 30 years ago. There are four long pieces and the cumulative effect is really quite overpowering (in the good sense). The tracks have been remixed and though I've never heard the original version, I must say I am impressed with the sharp focus and clarity of the sound stage.

The masterpieces of this genre are not many. Zappa's "Music for Violin and Compact Orchestra" with Jean Luc Ponty (from around 1968-69) was no doubt the first. Heresie is another. It is monumental. Thank you Cuneiform for putting this into our heads again!
Posted by Grego Applegate Edwards at 3:58 AM