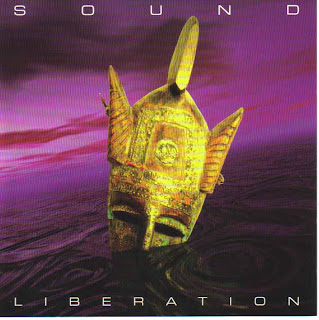 Anyone who reads this blog knows that there have been a number of review postings on composer-performer Gene Pritsker and his ensemble Sound Liberation. Today a look at the first Sound Liberation release from a few years back (self titled, no label listed).

It's not quite as excellent as the later releases. That's understandable. Gene and the band were finding their voice. Actually they had found it, a most unusual combination of hip hop, bebop, rock shred, show tunes, punk, funk and classical (both quotations and resituations of the standard and not-so-standard repertoire), and original contemporary compositional elements. There's also some very nice guitar work here. So they had found their voice, but were in a process of extending that unique combinatorial ethos and further developing the songwriting.

The resituations are well thought-out. The combinations are well integrated into a fresh and invigoratingly singular context. The end result is something very compelling. I would recommend starting with the VRE Suite, then for contrast, the second Sound Liberation disk. Finally, check this one out as the basis for the later things. Sound Liberation's view, MUSIC FIRST. Then, if you like, slap some labels on it. I totally agree with that!
Posted by Grego Applegate Edwards at 4:09 AM