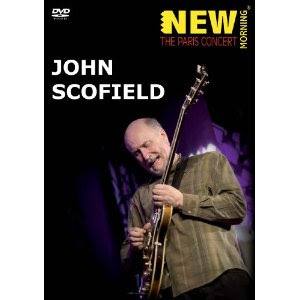 I am afraid I am guilty. I am guilty of taking guitarist John Scofield for granted. That is, I WAS until I checked out his new DVD New Morning: The Paris Concert (Inakustik 6478-1). I've always thought of him as a very good, important stylist in the rock-funk-fusion mode, and of course he is that. The DVD, a long set with his quartet live at the New Morning club in Paris last year, lays out, song for song, the case for Sco' as the complete jazz soloist.

First off, the quartet. They are in the pocket. They get a giant kick in the butt from drummer Bill Stewart, who swings like a daemon, with the kind of kicking accents Elvin Jones and Jack DeJohnette did and do so well, only it's Bill's personal amalgam of what can be done. His bass drum and ride cymbal work hard throughout, putting the swing into high gear. Bassist Ben Stewart lays into that pocket too. The two together make for a formidable team! Relative newcomer pianist-organist Michael Eckroth drives and solos with taste and fire and makes for a great foil to the Sco' presence.

Next the pieces. You get bop standards like "Steeplechase" and "Woody "N You" plus originals that have modern connotations, some rock-funk played with fire, some movingly poignant balladry and a soundscape feature for the more electric side of Scofield.

The man of the hour is most definitely John S. He gets a beautiful electric bluesy tone, plays changes like he was born to it, and brings out the full dimensions of who he is as a guitarist. As you watch and listen over the more-than-two-hours of the DVD, it becomes increasingly clear that Sco' really has it. And his band makes the kinetics that much more supercharged.

This is a wonderful disk. Absolutely recommended! Encore!
Posted by Grego Applegate Edwards at 3:37 AM