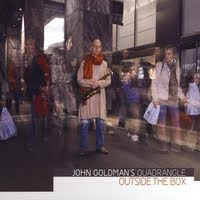 John Goldman lives in Chicago (and I'll bet it's COLD there today) plays a pretty cool sounding alto, writes good jazz music and has an interesting group called Quadrangle. Their new album just came out this month, Outside the Box (JG Music).

The first thing that struck me about the band and their music is the rather unique sound they get out of their instrumentation. It's John on alto and flute, Kendall Moore on trombone, Leslie Beukelman on mostly wordless vocals, Scott Hesse at the guitar, plus Patrick Mulcahy, Cory Healey and Juan Pastor on bass, drums and percussion, respectively.

John makes good use of voicings for sax-trombone and sometimes vocals and guitar in various combinations for a full-bodied yet translucent melodic vehicle. Hesse's close voiced comping in a burnished zone also gives the group a special sound. The band runs through seven Goldman originals plus "Monk's Mood." In the process they cover many bases. Some numbers have the classic horn frontline sound of some of the classic Blue Note Shorter and Hancock charts, but with the guitar and/or voice in there it's something slightly different sounding. And he goes somewhere with the sound regardless. They do some loosely hip bossas, a funk number, a latin groove, a ballad and so forth. Goldman, Moore and Hesse play some very decent solos and do not waste notes. It's not a blowing session though, so there is a balance between group musical arrangement and individual solo. There are moments of freedom too.

It's all quite captivating and enjoyable jazz from the middle US. Mr. Goldman is to be congratulated for forging a sound and picking strongly individual musical-sound personalities to realize it. This music is a pleasure to hear.
Posted by Grego Applegate Edwards at 3:40 AM