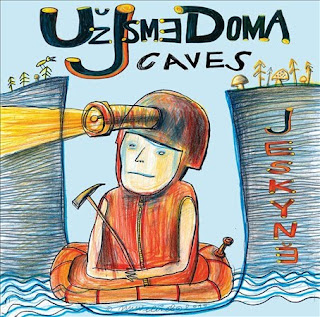 Uz Jsme Doma, the Czech rock outfit now working on their 26th year together, do not fit neatly into a ready-made pigeonhole. Their new, 7th N American-Western European album release Caves (Cuneiform Rune 312) shows that wildly eclectic does not always mean derivative. Not with Uz Jsme Doma at any rate. There is a strong flavor of Eastern European dance/folk forms, a punk directness, the intricacies of prog rock and a healthy, hefty infusion of avant rock.

Mirek Wanek, leader and principal composer for the group, crafts some very original music. Like Zappa before him, he does not stay in any one place for very long, and also like Zappa the rock song form manages to accommodate some seriously involved musical variations with some of the heft and substance of modern classical music.

I don't suppose it should come as a surprise that Czech culture should spawn a mastergroup of this sort. After all there has been a tradition of Czech excellence in music, literature and the arts for many centuries.

Guitarist Romek Hanzlik stands out as a very dynamic thrasher on these sides. The band as a whole is put through hairpin-turn gymnastics (to mix a metaphor) that tell beautifully what a long-time tenure can do for a band. They work and breathe as one on the musical plane. And the vocals are quite impressively brash and bravura.

It's an album that gives you faith in the regenerative power of creative musicianship. This is music for today and, I believe, music that will be appreciated long in the future. Highly recommended!
Posted by Grego Applegate Edwards at 3:49 AM