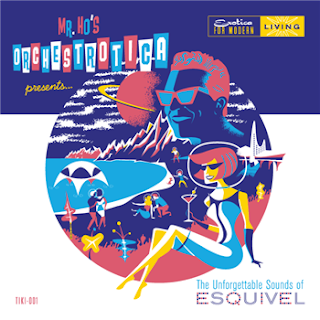 The advent of modernism took a giant moonwalking leap forward in the late '50s-early '60s, as the space program took off and post-war optimism and "prosperity" briefly brought on positive thoughts of a new world to come, where everybody was going to wear tin foil suits, eat their meals from a toothpaste tube and wash it down with a load of Tang while they gazed wistfully onto the universe out of the panorama window of their space station dining room. There would be more leisure, pundits told us, and we would have to fill it up with something fun. Like modular easy listening phonograph albums.

The world and history took a turn in another direction and the future came. It was different, not what was envisioned. The mood ended but not before creating a body of musical pop that is now referred to as "space age bachelor pad music." That moniker is a bit of a misnomer. Space age yes, but this was not exclusively for bachelors. It had much to do with owning a hi-fi system (later stereo) and having music on LPs that showed off your system to good advantage. I grew up in those days and my father was one of those enthusiasts. He had the obligatory hi-fi "system," which in today's terms produced music that a good boom-box can match. The point is that he was no bachelor, nor were the male head-of-household neighbors who shared in his enthusiasms. Frank Sinatra albums were far more likely to be what a space-age bachelor put on to impress his date. Or perhaps Julie London.

Of all the things to be revived, so called "space age bachelor music" has been to me the most perplexing. It started sometime in the '80s and came out of thrift shop culture, a hippie thing that underscored a disconnect with the very mechanisms that pop culture used to continue updating modernism through ongoing consumerism. Our local free-format station here in Jersey, WFMU, began playing, with irony, albums by Les Baxter and Martin Denny, two of the more interesting of the hi-fi exotica band leaders. I suppose it was happening on other stations with an anarchic bent as well, outside of Jersey, but I never encountered it.

On the surface I was involved. I would occasionally grab dusty albums of the stuff for 10 or 25 cents at my favorite thrift outlet, mostly as a goof, but I didn't realize it was part of a trend until FMU . . . and some of my friends started purchasing expensive box-set CD packages of the stuff.

Well so it goes and this has been a rather long prelude to today's CD, Mr. Ho's Orchestrotica Presents Exotica for Modern Living: The Unforgettable Sounds of Esquivel (TIKI 001). Everything about this production is authentic, right down to the space-cheese cover art and typography, even the running time of around 30 minutes, which was often about right for the LP releases of such music.

Mr. Ho (aka Brian O'Neill) has done a marvelous job recreating the arrangements of one Esquivel. Now I'm not really sure if we are being put on here or not, whether one Equivel really existed, but the idea is that Mr. Ho has been forced to reconstruct the best of Esquivel's arrangements from scratch, since they have all been lost.

So you get the obligatory 11 cut LP in the guise of a CD with all the trappings of the space-age exotica music of the era. A 23-piece big band with the "oohing" chorus, xylophones, bongos and a "full fidelity" menagerie of sound colors designed to make your hi-fi impress all the neighbors.

As I said earlier I never have quite understood this revival. But that's because it is not something you grok on an intellectual level. Like the very astutely done TV series "Madmen," it gives you a certain ironic nostalgia and the realization that the age had complexities that only now seem apparent. Namely in this case, space age music had a certain dash to it; the best arrangements brought a sound into the various living rooms, a sound that had an aesthetic that, by becoming extraordinarily passe, serves to remind you that the pre-rock age was not without its cult achievements, it's totally distinctive elements that were completely associated with the time that existed (we're talking strictly pop here; jazz was and is another matter altogether).

Mr. Ho brings it all back with totally idiomatic arrangements, beautifully performed. And there are no skips, pops and ticks there as one would find on the thrift shop albums! It's like owning a reproduction of a totally tacky, huge-finned 1959 Dodge. Totally passe, yet it speaks for an age now long gone in ways nothing else could.

It's a hoot!
Posted by Grego Applegate Edwards at 3:28 AM