Humanization 4tet "Electricity": Lopes, Amado and the Gonzalez Brothers Ring It In! 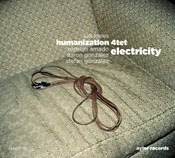 There are some CDs that are so charged with life, so immediate, so vibrant, that the music literally jumps out of your speakers from the first note. That's what I am feeling with the album Electricity (Ayler 113) by the Humanization 4tet.

This band has potency stockpiled in reserve. It's Luis Lopes on a very electric guitar, a player who knows how to create cosmic envelopes of sound and bring depth and space into a quartet such as this. Then there's Rodrigo Amado on tenor, who I've enthused about at length in the course of several reviews on the sister site, gapplegatemusicreview.blogspot.com. He has a terrific sound and abundant musical brains to realize some beautiful, fiery lines. The Gonzalez brothers, Aaron on bass and Stefan on drums, are long-time members of father Dennis's Yells at Eels (see the other site for a review or two of that band) and their lengthy tenure together has given them the kind of simpatico interaction that is rare these days. And they are great players to boot.

Electricity contains eight originals, all very stimulating vehicles for the players to launch off of. All four group members contribute worthy compositions.

And so to the music. It is totally modern, brimming over with life, and breathtaking in its combination of freedom and propulsion. It should make you a believer as to the strength of the quartet, individually and collectively. This is up there as a high point of the many new releases I've heard in the past year. Ring it in with the Humanization 4tet! It will be a great year if this is any indication.
Posted by Grego Applegate Edwards at 3:45 AM