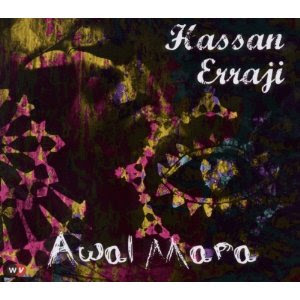 Sometimes when traditional musics become modernized, they end up sounding like disco, even not-very-good disco. Now I don't find such mass media influences very interesting. When a musician-arranger of the caliber of Hassan Erraji brings Moroccan music into the 21st century however, there is nothing compromised or diluted about the result.

His latest, Awal Mara (World Village), retains the instrumentation of serious North African forms but adds a very kinetic bass and drums that, as the saying goes, "rock out" the music in ways that I find irresistible. Hassan utilizes a wonderful ensemble that includes oud, fiddle, traditional percussion and such, and that rocking rhythm section. The vocals are very good, the songs excellent, and it all comes together in a very engaging way.

If this music were played in discos today, I might go and dance. If you know me, that is saying a great deal about how I respond to the music. (I don't generally dance.)

Hassan Erraji is a superlative force. Hook into his musical vision and you'll be transported to a fine place.
Posted by Grego Applegate Edwards at 4:43 AM