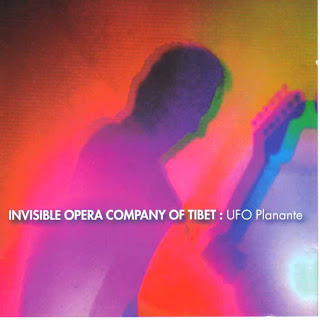 Today we return to Brazil for another disk of retro-prog psychedelia. The Invisible Opera Company of Tibet has a nice album going with UFO Planante (Voiceprint Brazil 125CD). It's guitarist Fabio Golfetti with bassist Gabriel Costa (from the Violeta de Outono band discussed yesterday), plus drummer Fred Barley.

This is some prime retro cosmic rock with some long jams, some very nice Golfetti electric slide and pick-driven guitar work, a prog Canterbury sort of approach and some very idiomatic songs with the vocals and lyrics to match. Floyd is in there somewhere again as an influence and there is also a very nice rendition of Robert Wyatt's "Moon in June," originally done as side three of Soft Machine's Third. They do it as a guitar-centered power trio and Golfetti's realization of the song gives it enough distinction that I never felt like I was hearing a reproduction of the original.

If anything this CD is even more attractive than the one from yesterday. Put the two together and you get a pretty good idea of the Golfetti way to go about things. Those who like the space rock jams of yesterday and today will find simpatico vibes happening throughout. A very good excursion for anyone inclined.
Posted by Grego Applegate Edwards at 3:43 AM