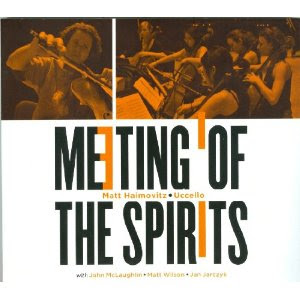 An eight-cello ensemble? That's Matt Haimovitz & Uccello's lineup on Meeting of the Spirits (Oxingale 2017). For something like this to work, of course, the material, the arrangements and the execution must be very good. David Sanford does the arrangements throughout and they are well-wrought. It's jazz repertoire all the way (except for Sanford's interesting modern classical piece "Triptych"). So we get a really ravishing version of "Open Country Joy" by Mahavishnu--and John McLaughlin guests on this one. The interplay between guitar and cellos extends the Mahavishnu sonority in ways faithful to the spirit of the original, and McLaughlin gets in some solo work that shows he is still in good form.

The very formidable contemporary drummer Matt Wilson joins the group on two numbers and kicks the ensemble into orbit, especially on the Mahavishnu odd-metered title track, which also brings in Jan Jarczyk on electric piano. The cellos take on most of the soloing and the original ensemble parts in a most convincing performance.

But there are also stimulating arrangements of Ornette Coleman's "W.R.U," Strayhorn's beautifully melancholy "Blood Count," Miles' "Half Nelson," "Haitian Fight Song" by Mingus, and more besides.

There's a kind of cello big band sound they get and it is done so convincingly that you stop thinking about how novel it all is and instead let yourself be captivated by the beauty and strength of the performances.

They do for the cello ensemble what Kronos has sometimes done for the string quartet. They make a convincing case for a sort of jazz-classical nexus in ways where the nexus itself is secondary to the pure enjoyment one gets from the music itself.

It's quite an achievement and highly recommended.
Posted by Grego Applegate Edwards at 3:47 AM