James Kinds' "Love You From the Top:" New Blues From Chi-town 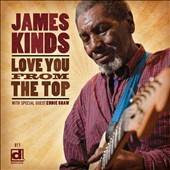 James Kinds has the blues. Up from Mississippi to Chicago in 1959, construction worker by day and bluesman by night, he is finally getting his due on the new Delmark release Love You From the Top (811).

He plays a rhythmic treble-centered soul-blues style guitar, has his own way of putting together lyrics that tell of hard times, disappointment and getting over it all. But it's his hard-edged vocal style that puts him over the top. He is in the upper range as far a blues voices go, and has a lot of blues-soul in the way Elmore James had it, only there's no mistaking James Kinds for anybody but James Kinds. He incorporates some soul elements in the way that Magic Sam did so well, only this time out it's James Kinds' way.

The blues has not expired. It lives with cats like James Kinds. The REAL blues, that is. This is in every way on the level of the best Chicago tradition. Grab a copy (see link) and go to town!
Posted by Grego Applegate Edwards at 3:50 AM