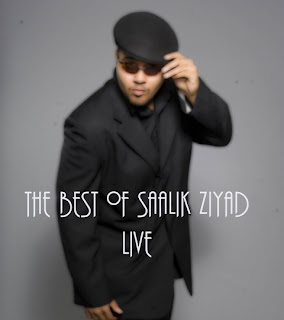 Billie and Lester, Andy Bey and Gary Bartz, Leon Thomas and Pharaoh Sanders, Jeanne Lee and Gunter Hampel, Doug and Jean Carn. . . . when jazz singers and jazz instrumentalists get together on an equal level the results can be very inspired.

AACM's Saalik Ziyad sings well. He also is one of those who prefers to do his singing the the company of accomplished instrumental improvisers. There is his 5 After 7 band for example, which features Fred Jackson Jr. on saxophone and Shaun Johnson on trumpet and flugelhorn. And he's been involved with various other lineups in the past, notably with a group that included Willie Pickens on piano.

Some of his very worthy music can be found at his www.saalikjazz.com and his www.youlistising.blogspot.com sites. Last year he was offering a free download of the files to his Best of Saalik Ziyad Live recording, a 2-cdr offering of some very compelling live music captures. I picked it up and have been listening to it with interest.

He sings and phrases like a horn, a horn that can do the words along with the music (of course, but hey, I mean like a HORN). He scats well and he has a sense of time that you would expect from a very good instrumental soloist. With "Passion Dance," "Black Narcissus" and "Caravan," he does the head melodies with lyrics, some presumably his own. It works! These are gigs where the tapes were rolling and the sound is always clear in a rough and ready state. What's important is that the energy and excitement of the live club gig is there in the best sense. His singing and the playing of his bandmates have the immediacy of the club gig on a great night.

Saalik is one of those Chicago treasures that those not following the Chitown scene on the club level may miss. I don't know if this CD is still available but there is plenty of music to check out on his two sites. He is a musician's singer. He is a real JAZZ singer. He should not be missed if you dig that. Do check him out.
Posted by Grego Applegate Edwards at 3:41 AM