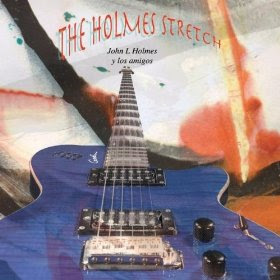 Washington State native John L Holmes and his seven-piece band take front stage for the CD The Holmes Stretch (I'm not sure of the label on this one).

The band runs through 12 of Mr. Holmes originals and they have some definite charm. This is mostly Latin-funk-jazz arranged well for the mid-sized ensemble, with Mr. Holmes one of the main soloists. His guitar playing is bluesy, pentatonic and generally attractive, and he gets an ensemble sound from the band that has some distinction.

The Latin grooves are mostly pretty hep. I found myself being drawn into the music at times. There are stretches though when I thought a little more fire and perhaps more up-tempo renditions of some of this material would do wonders. Sometimes there's not quite enough of a spark coming out of the speakers. Perhaps John was aiming at a radio market that prefers things smooth. This really isn't smooth jazz deep down and the entire disk would benefit from some more push in the rhythm.

But that's my take.
Posted by Grego Applegate Edwards at 3:44 AM