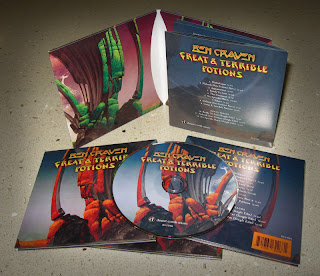 It's prog day at Gapplegate. Today we wear special hats. Not really. Listening to Ben Craven's Great and Terrible Potions (Desert Comb 10006) you feel like it is music to herald some special occasion, whatever it might be. It's important sounding music. And that's cool. It has a middle period Pink Floyd orchestrated largeness to it. Walls of synths, sometimes spooky-sounding, soaring guitar lead parts towering over sound towers, psychedelic moments, witching-hour minor tonality, sprawling, rather long-formed opuses. In other words Prog in the capital /P/ sense.

It's the Australian progger's second album. It's been five years coming. He's doing the singing. The voice is respectable. He plays all the parts, apparently, and did the production.

The result is something to laud. Instrumentally it is a symphonic soundtrack for the mind. My only quibble: some of the vocal-melody lines are not as distinguished as they might be. There are definite moments but some of the other song lines form a slightly predictable sequencing. The instrumental blend is so singularly ambitious, though. The fact that Ben mostly pulls it off means that there is much here to dig. If his songwriting develops from here, look out!
Posted by Grego Applegate Edwards at 4:47 AM