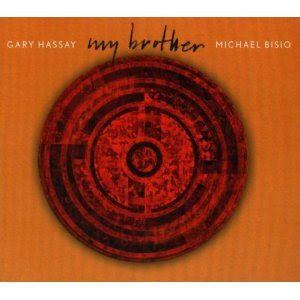 Duets can be interesting, they can be less interesting, but you cannot often say they are riveting. I would say that of alto saxist Gary Hassay and acoustic bassist Michael Bisio's My Brother (Konnex 5275). It is riveting because both players have virtually limitless imaginations and realize ideas in their very own way. It is riveting because it's the best kind of duo: where two excellent players inspire each other to bring out a side of their playing that sounds especially well in the context at hand.

Gary Hassay realizes well-thought-out yet spontaneous sound sculptures that take advantage of the classic jazz and outer realm capabilities of the alto; Michael Bisio complements and spurs on those alto flights with equally considered pizz and arco structures that have freedom but are logically and executionally exceptional.

Gary has always from what I've heard of him had a kind of Zen-like spirituality to his playing. Michael can go that zone well. The two head for high-consciousness, high-level improvisational territory and explore the terrain with care and inspiration. Gary can do a kind of quasi-Tibetan throat singing and when he does it here it never sounded better than with the accompaniment of Michael's arco chant-drones. But it is the alto-bass twosome that gets to some especially beautiful free places.

This is the best Gary Hassay playing I can recall hearing and Michael Bisio is on a personal high as well. Now that is saying a great deal, since both players are doing some heavy things!

It's a don't-miss-it CD, for adventurous souls and lovers of the new jazz. Grab a copy and go someplace very cool in your mind.
Posted by Grego Applegate Edwards at 4:06 AM