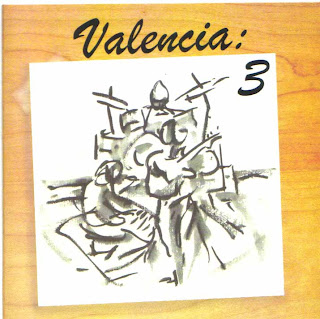 I don't know how easy the CD today will be to find. I didn't come up with much on the internet. But if you see it around, you might want to grab it. Valencia: 3 (Muse Eek 158) was an impromptu meeting of Bruce Arnold (guitar and super collider), Vicent Colonques (piano, keys) and Avelino Saavedra (drums) in Valencia, Spain, on November 2, 2008. The three had never played together before. But they created a kind of atmospheric, freely improvised, somewhat electric world during the course of the meeting that bears close listening.

It's not fusion, it's not conventional free playing, it's a spontaneous collective improvisation that hangs together in ways one does not hear often. It has some jazz-rock implications but they are not overt. Mostly it's three players listening and following a path together to some uncharted territory.

Bruce Arnold turns in some nice soloing but it's in its collective mode that things gel especially.

If you want to check out a copy you might Google Bruce Arnold and see what comes up. It's very interesting music.
Posted by Grego Applegate Edwards at 4:51 AM